If all had gone to plan, the $170,000 sale of a Normandy Invasion filly at the Fasig-Tipton New York-Bred Yearling Sale would have been an unmitigated triumph for Sarah Thompson and the mother-daughter team of Brenda and Danielle Jones.

For the two in the group that made it to Saratoga Springs that weekend, the money and praise that came with selling a filly of that caliber were a fitting payoff for what would be the most difficult sale of their lives, owing to the void left by the one that couldn’t be there. 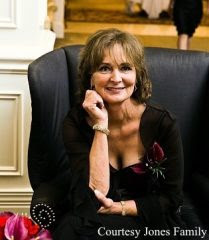 When Brenda (pictured) and Danielle Jones bought the filly, nicknamed “Norma,” for $30,000 at last year’s Fasig-Tipton Saratoga Fall Mixed Sale, the plan called for Brenda, her daughter, and Thompson to follow the horse to the ring together at the New York-Bred sale. They remained dedicated to that schedule even when the elder Jones learned she had Stage 4 lung cancer a few months before the auction. But she succumbed on July 26, just two weeks before the first horses shipped in for the state-bred sale.

The younger Jones and Thompson had even less time than that to recover from the shock. Fasig-Tipton’s Saratoga Select Yearling Sale came earlier in the week, and Danielle had horses to show for the Gainesway consignment, while Thompson worked for South Point Sales.

“The first sale was a little bit easier because I didn’t have my own horses,” Danielle said. “[The New York-Bred sale] has been a lot harder because my own horses are here, and I really thought she’d be here.”

Danielle Jones and Sarah Thompson first met each other about five years ago, showing horses at sales together for Gainesway. Jones has become the second generation to develop and pinhook horses on her family’s Silver Oaks Farm in Central Florida after Brenda laid the foundation as a respected horsewoman in the area. Thompson operates the management company ALL SET Equine Services in Lexington, Ky.

After the Joneses secured Norma as a weanling, Thompson expressed interest in joining the partnership for what would be her first pinhook. South Point Sales also joined in for a piece of the filly and would consign her at the New York-Bred sale.

Norma went from New York to Florida to be prepared by Danielle over the coming months. The filly showed promise and quickly developed into a favorite on the farm. When Brenda’s cancer was discovered, prepping the sale horses became a distraction from the illness for the Joneses instead of the other way around.

“Brenda really established herself as a great horsewoman, someone who knew how to prep horses really well and had a great eye for a horse,” Thompson said. “She passed all of that down to Danielle.”

“She stayed strong through it all, and Danielle stayed strong,” Thompson continued. “I think it’s a testament to Danielle’s horsemanship that she was dealing with that in such a crucial time in the prep process for Norma. Despite it all, the horse came up here prepped to the tens, ready to go. I couldn’t ask for a better partner or for a better experience on my first weanling-to-yearling pinhook.”

The filly quickly generated buzz when she reached the Saratoga sale grounds. Buyers were curious to see yearlings from the first crop of New York resident Normandy Invasion, and she didn’t let them down.

“She’s a late May baby, so she’s still not finished growing by any stretch of the imagination,” Jones said. “She’s going to be a beast next year. She’s really leggy right now.”

Jones and Thompson saw the level of buyers that were coming back for second looks, and they entered the auction’s second session confident they’d make money on their pinhook.

The two watched Norma go through the ring from behind the pavilion, near the outside bidspotters. Thompson scanned the area in hopes of seeing who would raise their hands on the filly, but once the price reached six figures, everything became a blur.

“There was a lot of hugging, a lot of crying – happy tears, of course – and we knew Brenda was there with us,” Thompson said. “We thought there was going to be a ceiling on what a Normandy Invasion could bring. We did not think that ceiling was $170,000.”

The filly blew past her reserve, more than paid back the $30,000 price tag she drew as a weanling, and she finished as the sale’s most expensive New York-sired offering.
Norma sold to Vineyard Ventures, with plans to be put into training with Ocala, Fla.-based Niall Brennan. The filly sold as a weanling in Saratoga Springs to a farm in Central Florida, then she returned to upstate New York to sell to another operation about five miles down the road back in the Sunshine State.

It was an emotional moment, but the flow of an auction doesn’t allow time for dramatic pause. Jones had to return to the Gainesway consignment to bring another of her pinhooks to the ring a half-hour later; a Goldencents filly who sold for $210,000.

Jones sold the filly as a partner with Blue Sky Stables, the weanling-to-yearling pinhook operation fronted by Brian Graves, Gainesway’s director of public sales. Graves was himself dealing with the loss of his father, the longtime Fasig-Tipton executive Bill Graves, who died in May.

A successful night of trade was a welcome reprieve for both of the Gainesway team members, and Jones said the empathy between the two longtime friends made a difficult week a little easier to handle.

“Brian gave me a hug and he said, ‘I know. These sales have been hard for me too.’”